Somewhere Over a Rainbow....

Back in January 2012 I was contacted by a lovely lady named Jessica. She was having her wedding at Aynhoe Park in Banbury near Oxford. I quickly googled the venue and was instantly stunned. 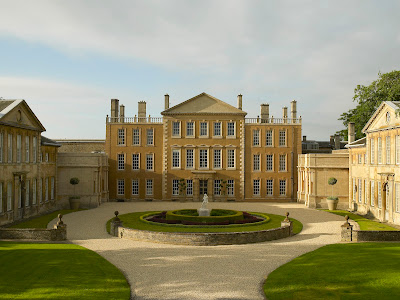 Not only did it look amazing on the outside, the inside literally made my jaw drop. Aynhoe Park is not a normal hotel, it is a privately owned spectacular 12 bedroomed house embodying British eccentricity at its best. It also happens to sit in 250 acres of beautiful Capability Browns gardens. 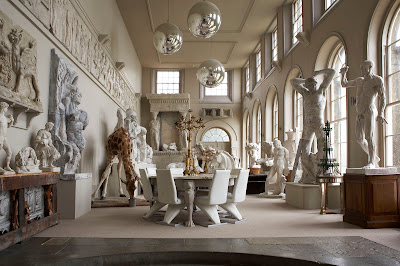 The house is owned by James Perkins, a veteran of the music industry and a collector of curious items from  his travels across the globe. The house is a living museum to his collections as well as the amazing art of Sophie Ryder. One of the first things looking at me as I drove to the rear of the house was a huge eye crafted from twisted wire. 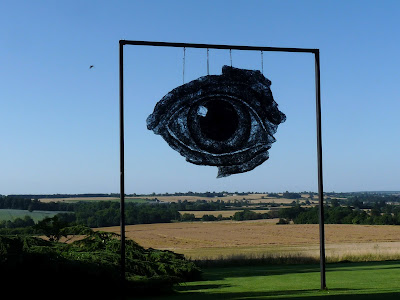 This amazing sculpture framed the landscape, I just knew I was in for a treat as I entered the house......anyway, enough about the house for now, what about the cake!! Well what was to be an amazing interior certainly needed a statement cake. Jessica the Bride had seen a picture of a cake in America and wondered if I could make it for her big day. 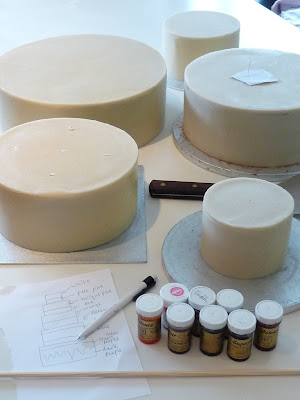 For those that know me well, I am always up for a challenge and when she told me about the cake I knew I wanted to recreate it and so the journey began. The cake was to be 6 tiers high, a mixture of chocolate mudcake (my favourite) and zesty lemon. The best part was it was to be decorated with every colour of the rainbow. There was going to be alot of colour mixing to do. 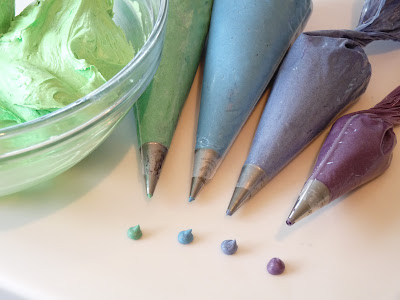 To grade the cake from one colour to the next it had to be piped in very small blobs of butter cream, with each colour slowly mixing into the next. So as well as the main colours I had to mix all the in between ones as well. And the whole cake was to be decorated on site due to the nature of the butter cream and the long drive to the venue. Phew. 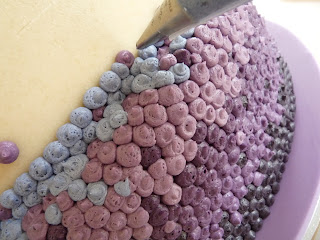 I piped the base 14" tier at home in preparation, especially as I had a feeling that this job was going to make my hand hurt!! 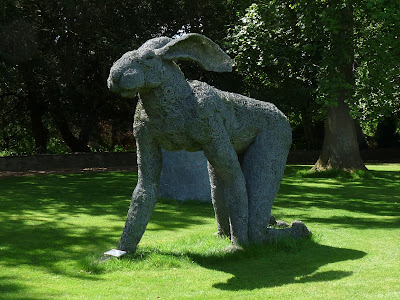 I got to the venue for about 9am on the most gloriously sunny morning.  Jessica was so lucky as it had rained for several weeks prior.
The family of the Bride had hired the whole house for the weekend and as I arrived they were all having breakfast. So lovely and relaxed. This is another of Sophie Ryders quirky sculptures in the sunny gardens. 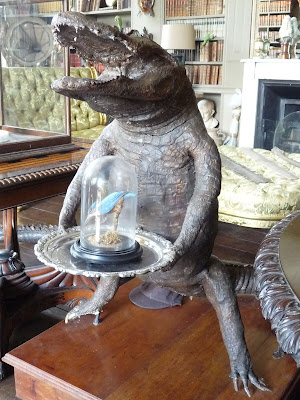 I can't even begin to tell you what crazy delights greeted me as I entered the house, I even had a sneeky peek in the gents toilets (highly recommended!) and was greeted with a row of stuffed ferrets coming out of the wall. Just hilarious :)

The cake was due to be assembled in the main entrance hall on a large glass table and that is the moment when I met Hercules, the new love of my life. I knew I was going to need some help and he provided me with moral support during the 5 hours of crazy dotty piping I was to endure. 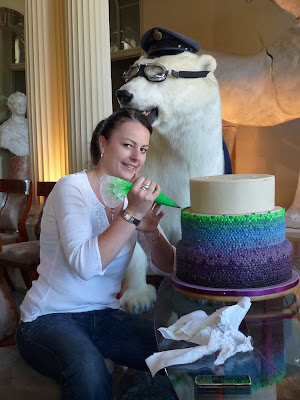 Ahhh bless, he's touching my knee and nibbling my ear, ;) and no, he's not a dog he is a full sized whopper of a stuffed polar bear! That's not to mention the mini unicorn sat on the piano opposite me (a stuffed Shetland pony I think!) 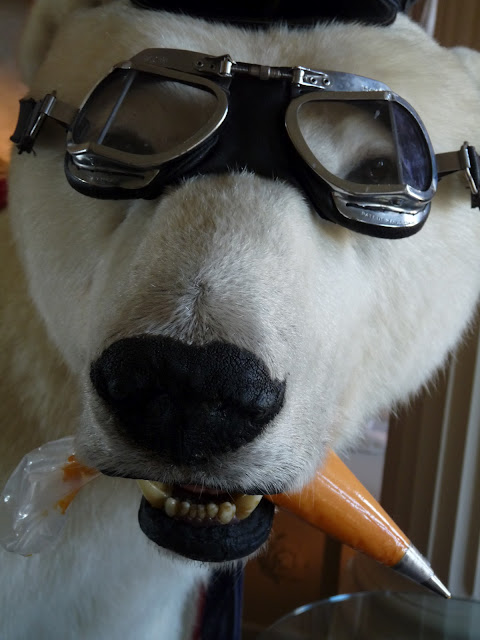 He actually became a dab hand with a piping bag so it wasn't long before we had progressed to the oranges and yellows. 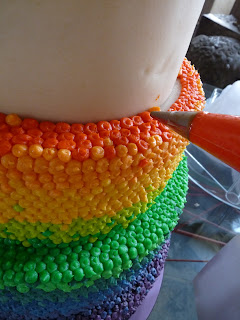 You really would be amazed at how many colours went into this cake, I had a bit of a play in the kitchen at home whilst I was mixing. I used to be an artist/designer before I became a cake maker, so turned my icing into a painters palette for inspiration. 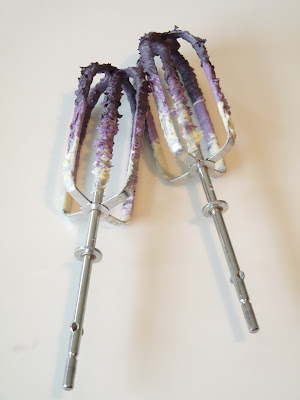 Even the blades of my electric beaters looked pretty with the graded colours. 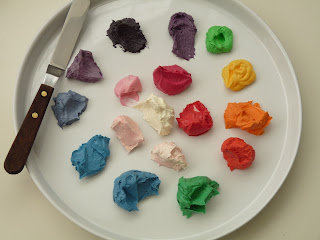 Whilst I was decorating away, all the family members kept popping by to say hello and see how far I'd got. The children were fascinated and even the florist arrived to dress the venue  and entrance hall with some beautiful garden flowers. 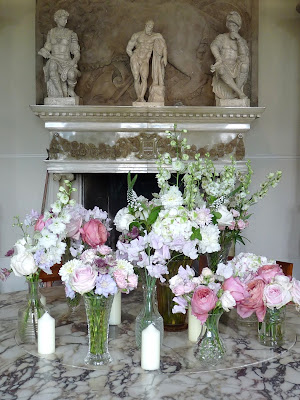 After about 4 hours I started to see the end and the last few dots. Then I met Rhodri the Groom. He had a special little something for the top of the cake. I have to admit I am a bit 'anti' cake toppers, but this one I loved. Two cute little dinosaurs with a love story to tell :) They suited this crazy cake perfectly. 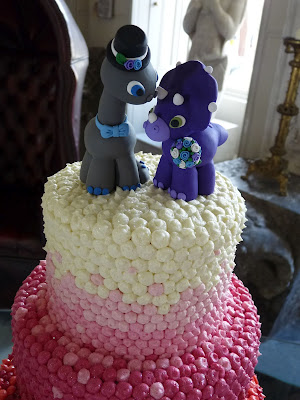 Before I get to the end of this cakey story I have to show you the rooms where Jess and Rhodri were getting married. Just as crazy as the rest of the house. Having a giraffe in the room on your wedding day is not a usual occurrence. And half a giraffe walking through the wall, well that is something that certainly doesn't happen every day :) Attached to the ceremony room was the room where the reception was to be held, each room joining together to form an amazing view all the way from one end of the house to the other.....with a crocodile to boot. 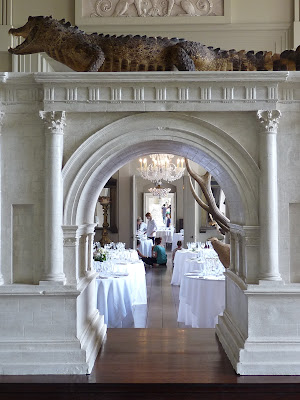 And now to the cake. I have to say I loved it. In fact I loved the whole adventure. And the funny thing was, no matter where I stood to take a photo, Hercules the superstar assistant just had to be in it! 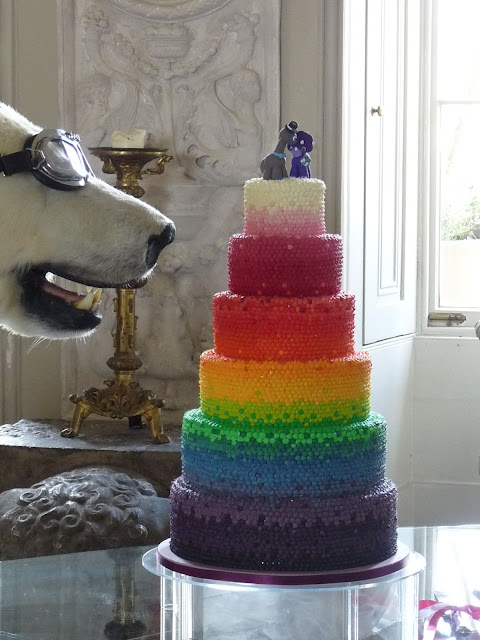 Looks like he is about to take a big chunk out of it! Please scroll down for a few more pics. 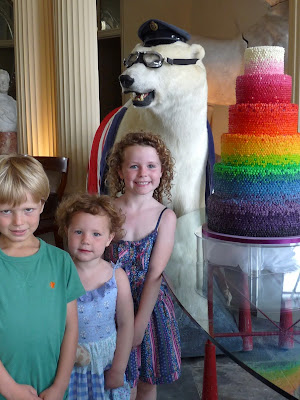 Here are a few more of my little helpers. 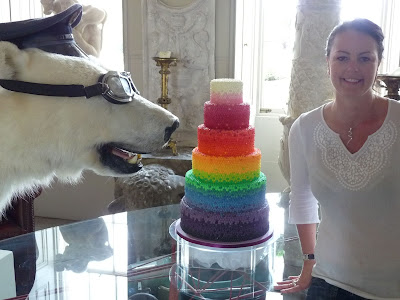 Me and the new assistant. You're hired :) 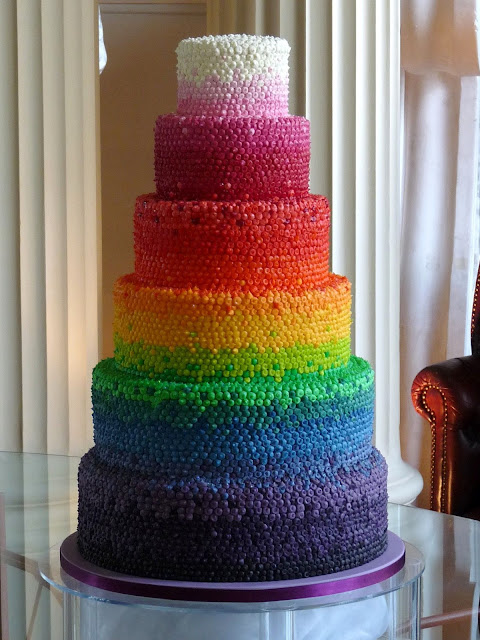 I hope you all enjoyed reading the story as much as I enjoyed making the cake.
Congratulations to Jessica and Rhodri who wed on July 28th 2012 ;)